SAINT SAVA CULT OUT OF CONTROL Did the Serbian Orthodox Church prepare the script from the post office in Nikšić for the Cetinje Monastery?

Considering that dozens of other very problematic people were supposed to go to Cetinje on September 5, and that a large group of very suspicious people entered the Cetinje monastery without any police checks, the question arises whether there could have been bloodshed in the capital? Could the scenario that happened in the Niksic post office have happened in the Montenegrin Capital and escalate into conflicts in other Montenegrin cities? 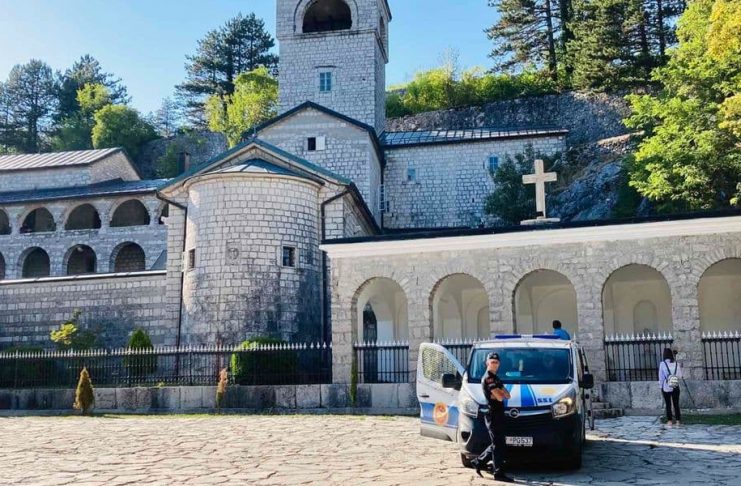 The Saint Sava cult of blood and soil, which is kept in unofficial records under the name of the Serbian Orthodox Church (SOC) in Montenegro, has been considered an extremely controversial organization for decades.

That the Church of Serbia did not get rid of the mortgage of a criminal, parapolitical organization for counterintelligence and subversive actions is best seen in the example of Montenegro, where the leading structures of this cult, with the wholehearted help of an incompetent vassal government, completely stopped the democratic progress of the state which is also evidenced in the report of the European Commission (EC).

Anarchy is present in Montenegro – the Government and the Assembly do not function and the foundations of the judiciary are deeply compromised. In such an atmosphere of halted social development, Montenegro became a suitable ground for returning to the environment of the 1990s, imbued with anxiety, uncertainty and constant fear of Greater Serbia, aggressive clerical hegemony.

In the atmosphere of hopelessness created by the Serbian Church and the principals from Belgrade through the incompetent dysfunctional government, the Montenegrin public experienced a shock!

On Wednesday at nine o'clock in the morning, in the very center of Nikšić, Ljubiša Mrdak (50), a security worker, was brutally killed, while trying to prevent the robbery of around 400,000 euros of money from the building of the Post of Montenegro.

An even bigger shock followed when it was announced that Stojan Albijanic was first arrested for the previous operation in Bileca, and that the day after him, the police arrested another suspect in Igalo for participating in the robbery – Mitar Knezevic from Niksic.

Apart from the fact that this case is horrible in itself because an innocent man ended tragically just because he did his job, after the heinous act many questions were opened – first of all about the connection between the Serbian Church and extremists and criminal groups and their intentions during the enthronement of SOC official Jovan Mićović on September 5 in Cetinje.

The Serbian Orthodox Church does not mind a thick file

As it was announced yesterday, Albijanic often stayed in Nikšić, he was a member of the “Serbian Honor” fraternity and a participant in the liturgy in that city. His photos with the Serbian member of the presidency of Bosnia and Herzegovina, Milorad Dodik, are also circulating on social networks.

The other suspect, Mitar Knezevic, is very well networked in the structures of the Serbian Church in Montenegro – he is one of the leaders of the group of “Serbian patrons”, he was a prominent participant in the liturgy, and his brother is the priest Ostoja Knezevic, who was previously the elder of the Niksic monastery, and after the enthronement of Joanikije Mićović, he was appointed parish priest of Cetinje and secretary of the MCP in the Cetinje monastery.

Knezevic was also one of the people who came to the premises of the Municipality of Niksic, to meetings with President Marko Kovacevic before the enthronement of Jovan Micovic in Cetinje, and as the media wrote, he led a number of people with suspicious biographies to the Cetinje Monastery, to be in Cetinje on September 4th and 5th as a “protection cordon” during the enthronement of Mićović.

An extensive criminal record did not prevent Knezevic from being a member of the Democratic Front and from being at the disposal of the Serbian Orthodox Church. Knezevic was given full confidence by the president of the municipality, Kovacevic, just before the enthronement of Joanikije, to organize a group that will be mobile and ready, if necessary, to go to Cetinje.

Was the Serbian Orthodox Church preparing bloodshed in Cetinje?

Apparently, due to the incompetent government and the savage church of Serbia, which took over the levers of power in the country, we became a training ground for frustrated right-wingers from Serbia and Republic Srpska, who circulate freely through the established Budimlja-Niksic canals trampled by the current metropolitan, former bishop Jovan Micovic.

Considering that dozens of other very problematic people were supposed to go to Cetinje on September 5th, and that a large group of very suspicious people entered the Cetinje monastery without any police checks, the question arises whether there could have been bloodshed in Cetinje? Could the scenario that happened in the Niksic post office have happened in the capital and escalate into conflicts in other Montenegrin cities?

Just because the unworthy priest had a whim to enthrone himself in the Cetinje monastery against the will of the whole of Cetinje and the majority of Montenegro, it has now become clear that certain political and church structures are ready for anything – even by hiring obscure people to “guard” the monastery from Montenegrins and thus cause bloodshed.

After all, extremist and criminal elements should have gone to Cetinje with the blessing of Joanikije and the president of the municipality of Niksic Kovacevic. To this day, it is unclear how many of them left and how many were in the Cetinje monastery, and it also remains unclear whether they were armed and whether they were ready to shoot at the “Milogorci”!?

One thing is clear, however – the local pro-Serbian politicians have no authority, just as the unworthy Joanikije, to control their extreme supporters, which they used in litijas and for dirty deeds in the elections, especially the local ones in Niksic.

It is also clear that church and political officials (which comes to the same thing) allowed the criminogenic element to be incorporated into the so-called church, just to achieve their political goals.

Security institutions, as well as the entire state, are in disarray, so it is a very suitable environment for the development of all forms of deviant behavior and extremism.

Considering that both Knezevic and Albijanic belonged to the so-called “fraternities”, the dilemma arises as to whether they are in fact grouped and protected gangs of criminals who function as branches of the Serbian church and carry out various criminal acts, according to the model of fan groups in Serbia!?

The connection between the Serbian Orthodox Church and criminal elements, however, should not be surprising, because for decades this organization has been considered a safe haven for criminals and war criminals who were blessed by priests in the 1990s before embarking on criminal campaigns in war-torn areas, what you can read on THIS LINK.

In recent decades, the Serbian Orthodox Church has also been continuously following controversies – from involvement in pedophilia, vivid criminal bishops such as Pahomije and Kacavenda, financial embezzlement, political and subversive activities, inciting rhetoric, all the way to connections with right-wing criminal organizations. After all, what to expect from the supporters, the so-called “believers” of this organization, organized on the principle of cult, when the leader of their Montenegrin branch, Jovan Mićović, is being prosecuted for concealing pedophilia.

So? What is not clear here?