With a “soft force” towards the “Serbian world”

Today, the Belgrade kakistocracy with cynical violence announces its intention to create a "Greater Serbia" again, because it is convinced that the so-called international actors will not seriously mind. True, it learned from the wars of the 1990s that the beating has two ends, so it proclaims that it will not create a "Greater Serbia" by force of arms, but in a peaceful way. 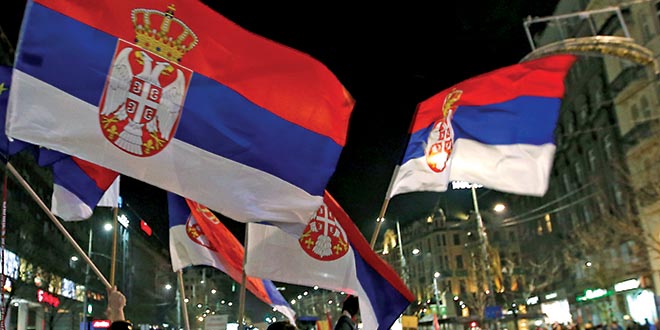 The Belgrade kakistocracy openly announces the creation of a perfected version of “Greater Serbia” under the name “Serbian World” in the territories of Montenegro, Bosnia and Herzegovina and Kosovo.

Until now, Serbia and its surroundings could not hope for anything good from such a government. With the ideology of radical nationalism – which permeated all spheres of life in Serbian society – it overshadowed its only true political practice of mafia tribalism.

The government in Serbia is unmistakably following the path of destroying its political and economic and cultural being. Every day – and so for years – it shows that the state it liked has nothing to offer but a great show of constant nationalist siege and aggressive building of real and fictitious muscles against “internal and external enemies.”

It inherited and perfected the cynical political irresponsibility of the “Serbian” rulers towards “their” state, which was rooted in the Eighth session of the Central Committee of the Serbian Communist Party. It also inherited all the consequences of the severe war defeats experienced by the Greater Serbia militarist policy in the 1990s.

The legacy of war defeats has weaned it from the desire to realize the dreams of great power by force of arms. Unfortunately, it did not stop it from the destructive urge to constantly try to destabilize the states formed on the ruins of Yugoslavia politically and security-wise by other means.

In the following years, its dream of conquest was revived by the rise of the Russian military and Chinese general power. No less, it was encouraged by the West's breakaway policy towards the Balkans, with numerous indications that Pax Americana was in decline.

Today, the Belgrade kakistocracy with cynical violence announces its intention to create a “Greater Serbia” again, because it is convinced that the so-called international actors will not seriously mind. True, it learned from the wars of the 1990s that the beating has two ends, so it proclaims that it will not create a “Greater Serbia” by force of arms, but in a peaceful way.

It should be trusted, because after the time of war defeats, it quietly decided on creeping methods of achieving great power. Apparently from all over the world, it has been peacefully dismantling the state of Bosnia and Herzegovina since Dayton. Apparently, the Montenegrin ruling nomenclature, since the 2006 Referendum, has dissolved all elements of the existence of an independent and sovereign Montenegro. It has been trying to do the same since the Kumanovo Agreement with northern Kosovo.

All this has done and will continue to do in the future as a specific form of strategy of aggression towards neighbors, which in modern political technology is called – a soft power.

What is soft power? Thirty years ago, Joseph Nye, a Harvard professor, called a specific form of domination policy, especially American politics, “Soft power is the ability to get what one wants through the voluntary participation of allies, not by coercion or aid.”

“Hard power” is military and economic coercion. Weapons and money are its main instruments. By soft force, political results are achieved by the willing consent of those who are exposed to it. Adherence comes from stupidity, ignorance, and inferiority complexes. It can be caused by an “implicit threat,” but also by the attraction of what is offered by soft force, most often like a knife in cotton.

Soft power has always been applied in relations between states and peoples. Lao Tzu said, “There is no thing in the world that is weaker and softer than water, but it can destroy even the hardest thing.” Language and religion are the oldest means of soft power. In modern times, they are joined by culture, education, science, technology and the media.

Whoever penetrates the identities of other states and peoples with soft force, has a great chance of achieving general ideological, and through it political hegemony, over them – without an open war. Seducing states and peoples by soft power is always more effective than direct coercion!

The purpose of soft power is to spread influence. States and peoples are thus subtly imposed their interests, value systems, goals, political will and identity. “In a pleasant form” it creates a relationship of domination and subordination, superiority and inferiority. “Smart power” is created by combining hard and soft power.

The doctrine of soft power is partly applicable to understanding Montenegrin-Serbian relations from the Berlin Congress to the present day. Greater Serbia was waging a permanent mental war against the Montenegrins with soft force, with the ultimate intention of radically changing their national self-consciousness.

Their work was infinitely easier, because from Petrović until today, no political set that ruled Montenegro was ready or able to conceive or implement a defense strategy of identity policies.

The most productive form of soft force is built on the attraction factor.

First. The ideologues of Greater Serbia have always approached Montenegrins with an effort to root in the traditionally poor Montenegrin society the myth of the general desirability of Serbia because of its economic wealth, and through it its national values.

Another. They spread the myth that Serbia has the right of Piedmontese leadership in any political unification of the South Slavs, and that – in accordance with that – the Montenegrin “whistle” has historically died out, which for centuries called for the freedom of the surrounding brothers.

Third. By solving their own demographic problems, Greater Serbia ideologues opened the door wide to the social, career and business success of Montenegrins in Serbia.

Fourth. With the mythology of Dušan's empire and Kosovo, they spread the idea of ​​Montenegrin historical, cultural, civilizational and educational interiority in relation to Serbian superiority.

Fifth. With the tactics of double attitude, they “Serbized” everything that is Montenegrin, and on the other hand, they treated everything in traditional and modern Montenegro paternally and underestimating.

Sixth. The consent of Montenegrins to these “attractions” was stimulated and rewarded in appropriate ways. Disagreement entailed a threat of “betrayal of Serbs.”

In addition to the attraction stimulation factor, the identity infiltration factor into Montenegro is widely used. The policy of “pro-Serbian” infiltration into the Montenegrin linguistic, religious, cultural, educational, scientific and media identity space has been systematically pursued.

The autochthonous linguistic being of Montenegro and Montenegrins – by the constant and harmonious negation of the existence of the Montenegrin language – has been systematically suppressed in favor of the Serbian linguistic paradigm.

The autochthonous Montenegrin Orthodoxy was institutionally destroyed, and then persistently pushed out of the consciousness of generations of people in Montenegro. Serbian Orthodoxy and the Church of Serbia have been made the only acceptable religious paradigm.

From the beginning, Montenegrin education – first spontaneously, and then very organized – was founded Serbocentrically, most often by mechanically taking over other people's pedagogical paradigms, teaching contents, textbooks and the leading worldview paradigm of the educational system. The scientific policy of Montenegro was started according to the same habits.

Instead of developing its own indigenous culture, Montenegro has been made a victim and addict of Serbian mass culture. It has led to a general primitivization and destruction of cultural and aesthetic standards.

Greater Serbia has achieved with soft power in Montenegro what it could never with armed force! Today, its ideologues are more convinced than ever that with a little more soft power, Montenegro will fall into their lap like a ripe pear.

Maybe Montenegrins will finally figure out what this is all about.