“FREEDOM” HAS ARRIVED FOR JOANIKIJE'S PROTEGE: Pedophiles still under the protection of the Serbian Orthodox Church, the main pimp returned to Montenegro!

The photo clearly shows Nikolaj Stamatović, the main pimp of the Serbian Orthodox Church, who was arrested in 2013 after he tried to sell compromising footage of bishop Vasilije Kačavenda. He is a man who knows the entire pedophile network in the church of Serbia and that is why they protect him. His mentor is the current Metropolitan Joanikije, who saved him once when he transferred him from Bjeljina and hid him in Montenegro, in a monastery near Bijelo Polje. The fact that Stamatovic, despite being expelled, was returned to Montenegro, shows how strong the Serbian Orthodox Church is. 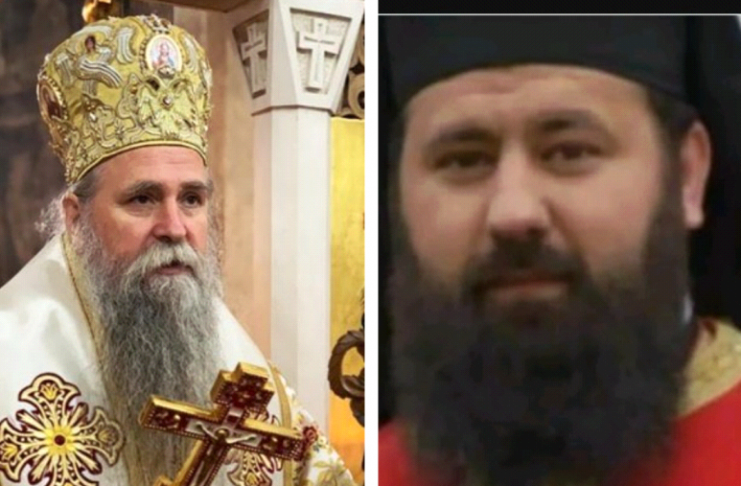 The controversial Saint Sava cult of blood and soil, which is run under the name Serbian Orthodox Church (SOC), since it won power in Montenegro, is simply above the law, and the vassal-treacherous government led by religious extremist Zdravko Krivokapic is only a service branch of this para-religious subversive organizations.

We witness every day that the Church of Serbia in Montenegro behaves as an occupying office, and the knowledge that the insiders of the Aktuelno portal submitted to our editorial office shows how far they are ready to go in their disobedience.

The main pimp poses with Metodije and the special force “Backo”

The Bishop of Budimlja-Niksic, Metodije Ostojic, visited Bijelo Polje last week, where he met with officials of this organization. 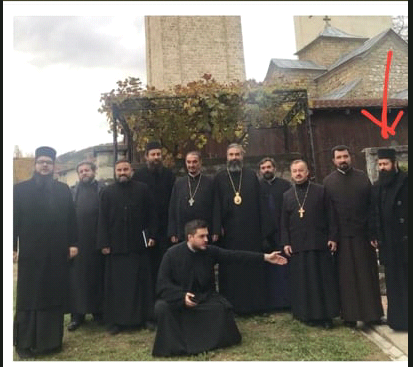 The official photo published after the meeting shows Metodije posing with SOC officials, including Mijajlo Backovic, and as confirmed by our sources, in the picture, in the right corner is Stamatovic, who apparently returned to Montenegro.

“The photo clearly shows Nikolaj Stamatović, the main pimp of the Serbian Orthodox Church, who was arrested in 2013 after he tried to sell compromising footage of Serbian bishop Vasilije Kačavenda. He is a man who knows the entire pedophile network in the church of Serbia and that is why they protect him. His mentor is the current Metropolitan Joanikije, who saved him once when he transferred him from Bjeljina and hid him in Montenegro, in a monastery near Bijelo Polje. The fact that Stamatovic, despite being expelled, was returned to Montenegro, shows how strong the Serbian Orthodox Church is, “said our source from the Church of Serbia.

As he stated, he is currently investigating “whether he wants to compromise Metodije Ostojic, who is considered a ‘healthy wing’ of the Serbian Orthodox Church in Montenegro”, by photographing pimp Stamatovic and a special agent close to the intelligence and security services, Mijajlo Backovic. Aktuelno will write in one of the following texts about who is sabotaging Ostojic, whom the late Amfilohije left as a bequest to clean up the Serbian Orthodox Church in Montenegro.

Under the protection of Micovic

While the main pimp and security interesting person walks around Montenegro after the arrival of “freedom” brought by the new government installed by the SOC, his direct protector, the head of the Montenegrin branch of the SOC Jovan Micovic walks around the Delta shopping center in Podgorica where he was last night watching the screening of the film “Man of God”.

For now, it is unknown whether Joanikije directly participated in the pardon of Stamatovic and his return to Montenegro, or whether he only approved the order that arrived from the headquarters in Belgrade.

It should be reminded that Stamatovic has long been under the protection of the newly elected, so-called, helicopter-landing Metropolitan Micovic.

He was arrested for filming with Kacavenda

Last year, within the confession of former SOC deacon Bojan Jovanovic, the portal Aktuelno announced that the SOC Commission headed by the then Bishop of Budimlja-Niksic, Joanikije Micovic, launched an investigation in 2012 due to alleged three cases of pedophilia in the Cetinje Monastery, which was covered up.

Jovanovic then said that Nikolaj Stamatovic was “moved” to Montenegro in order to cover up his role in the pedophile-homosexual chain in the Serbian Orthodox Church.

It should be reminded that, as the media wrote at the time, Stamatovic was arrested in front of the SOC Patriarchate in Belgrade in September 2013 for trying to sell a compromising video of former Bishop Kacavenda with four young men.

“The church leadership wanted to remove Stamatovic from the church, but the problem was that he had recordings and films of bishops who had sex with children. Stamatovic offered me one of the films for 100,000 euros. He thought I was a powerful man backed by the Government or some powerful institution. Nikolaj almost gave me an ultimatum – to save money for the film, and if I don't, there are people who will pay,” Jovanovic said in a “testimony” published by the Aktuelno portal in July last year.

Joankije hid him in Montenegro

Jovanovic then said that despite the huge amount of evidence, the police in Serbia released the main pimp of the Serbian Orthodox Church and he returned to Bijeljina to serve. After that, Stamatovic was transferred to Montenegro.

As Jovanovic testified in his confession, the then Bishop of Budimlja-Niksic, Joanikije, came to Bijeljina, they went to court where Nikolaj testified that he knew the whole network of pedophilia and that he was ready to testify about pedophilia in the Serbian Orthodox Church. Joanikije then transferred him to Montenegro, where the priest who is accused of spreading pedophilia and pornographic material serves in the monastery near Bijelo Polje.

The late Amfilohije Radovic and Joanikije, as we wrote, knew everything, they brought a pimp to Montenegro and there is evidence for that.

In the meantime, Nikolaj Stamatovic was expelled from Montenegro at the beginning of July last year, with a ban on entering for at least a year. Apparently, the leaders of the Serbian Orthodox Church hurried to return him to the “safe harbor” near Bijelo Polje.

Logging in to SDT taps in place

Last year, the portal Aktuelno published a series of three texts in which, based on the confession of the former monk Bojan Jovanović, we presented to the public how the Serbian Orthodox Church in Montenegro covered up cases of pedophilia, tried to use them for political confrontations within the church. We also wrote how dangerous members of a criminal organization dressed in the mantles of the Serbian Orthodox Church were hiding on the territory of Montenegro under the auspices of Micovic, the then Bishop of Budimlja-Niksic.

At the promotion of his book “Confession How We Killed God”, Jovanovic openly accused Joanikije Micovic of covering up cases of pedophilia, after which the NGO Montenegro International filed a criminal complaint with the Special State Prosecutor's Office (SDT) for covering up pedophilia against Micovic and the Metropolitanate of Montenegro and the Littoral.

As there was still no official reaction from the SDT, this NGO addressed a special letter to the Special State Prosecutor Milivoje Katnic. The case is still tapping into place.