As evidence in addition to the criminal report, a photo from the premises of the Government of Montenegro, taken on September 5, was submitted to SDT, in which, in addition to Krivokapić, part of the command staff and other persons were mentioned: MP Marko Milačić, Momčilo Koprivica, ministers Milojko Spajić, Olivera Injac, Jakov Milatović, and the director of the ANB Dejan Vukšić and the head of the Cabinet of the Prime Minister Ivana Malović. 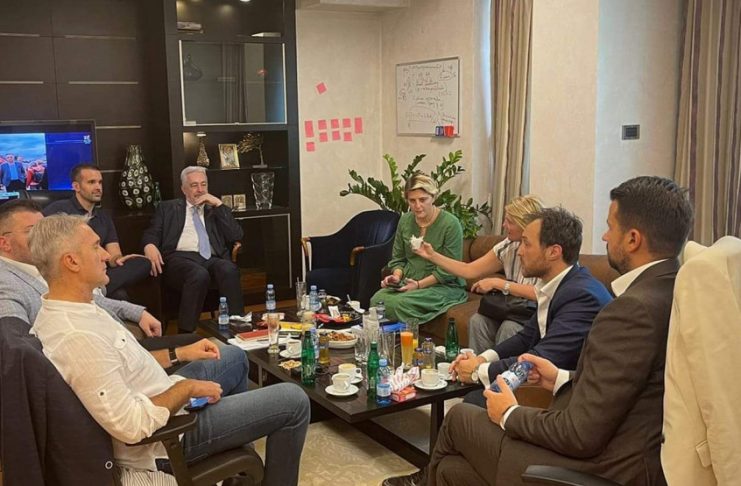 The Democratic Party of Socialists filed a criminal complaint with the Special State Prosecutor's Office against Prime Minister Zdravko Krivokapic and others on suspicion of abusing their position and exceeding their official authority during the events in Cetinje on September 4 and 5, 2021.

As stated in the criminal report, which Dnevne novine had insight into, abusing the position of the Prime Minister, MPs, ministers, etc. they exceeded the limits of their official powers in such a way that Krivokapić formed a body that had no legal and constitutional authority to make decisions concerning national security, if in principle it took over parts of the command of the security forces operation on 5 September in Cetinje.

As evidence with the criminal report, a photo from the premises of the Government of Montenegro, taken on September 5, was submitted to SDT, in which, in addition to Krivokapic, part of the command staff mentioned other operations: MP Marko Milacic, Momcilo Koprivica, ministers Milojko Spajic, Olivera Injac, Jakov Milatović, and the director of the ANB Dejan Vukšić and the head of the Cabinet of the Prime Minister Ivana Malović.

In this regard, MP Marko Milačić, in a statement issued on September 6, said: ‘At a time when the state was facing a roadblock, with elements of a wider coup d'etat, the political action of the DPS leadership which was operationally led by the advisor to the President of the state Milo Đukanović, Veselin Veljović, due to the refusal of some to act to protect the state, the Prime Minister of Montenegro Zdravko Krivokapić personally took full responsibility and full control, established order and resolutely protected the Constitution, public order and peace and the state of Montenegro.”

ORDERED THE ARREST OF VELJOVIĆ?!

Also, Krivokapić is charged with violating the right of another by exceeding the limits of his official authority on September 5, 2021, by giving an order to the Assistant Director of the Police Administration to deprive Veselin Veljović of his freedom, in addition to his constitutional and legal powers.

“What he admitted on his Twitter account on the same day: ‘I am informing the public that the swift action of the police, which I ordered, just handcuffed Veselin Veljović’, as well as on September 6, 2021 in a press statement when he pointed out that “he ordered the arrest of Veselin Veljovic,” explaining on that occasion that he had given an order to one of the assistant directors of the Police Directorate, Zoran Brdjanin, thus committing the criminal offense of abuse of official position,” the criminal report states.

In the explanation of filing the criminal report, the DPS states that the basis for suspicion that the defendants committed the criminal offense of abuse of official position under Article 416 paragraph 1 of the Criminal Code of Montenegro derives from the competences of the Government, ie the Prime Minister, ministers and MPs, based on the Constitution of Montenegro, as the highest legal act, but also the powers that police officers, ie state prosecutors have in accordance with the Criminal Procedure Code and other regulations.

“Having in mind the fact that the decisions they made were reported under the exclusive competence of the Defense and Security Council, the National Security Council of the Police Directorate raises the question of where Zdravko Krivokapic, as Prime Minister of Montenegro, derives his authority to form a body to take over command of police and other security actions that were taken on September 4 and 5 in Cetinje, as well as on the basis of which Zdravko Krivokapić included deputies, certain ministers and other persons in command of those actions who, according to their legal competencies and powers, cannot be part of the chain of command of police other actions. MP Marko Milačić himself testified to all this by stating that “the Prime Minister took full responsibility and control, established order and resolutely protected the Constitution, public order and peace and the state of Montenegro“, the explanation of the report states.

MANAGED THE WORK OF THE POLICE

“By doing so, the reported Prime Minister Zdravko Krivokapić damaged the reputation of the Government of Montenegro, violated the Constitution and all other laws and bylaws that regulate the matter of management, directing police work, application of police powers and other police work and activities, but also harmed others,” he seriously violated his rights, because the assistant director of the Police Administration acted on his order, and apparently ordered his subordinates to immediately invite Veselin Veljović to the official premises of the Police Administration of the Cetinje Security Department. The procedural actions taken against Veselin Veljović that day by the officers of the Police Directorate were carried out in accordance with the will of the Prime Minister, who allegedly does all this for the ‘protection of the citizens of Montenegro’, and in fact justifies his arbitrariness”, it is emphasized in the explanation of the criminal report.

Abused the position of MP

At the same time, other persons covered by this report abused the position of deputies, ministers and other official positions by participating in the illegal action of leading the police and on that occasion together with Prime Minister Krivokapić participated in issuing binding police orders, knowingly exceeding the limits of their constitutional and legal powers. and which they knew and must have known they did not possess.

“All the above was proved by Prime Minister Krivokapic himself, citing his Twitter account and a statement in the media, as well as MP Marko Milacic, who stated that he was a direct witness to the events when the Prime Minister took full responsibility and control, established order and resolutely protected the Constitution, public order and peace and the state of Montenegro’. Based on the above, we believe that there are elements of a criminal offense prosecuted ex officio, and in this regard we propose that the Special State Prosecutor's Office carry out actions within its competence, in the direction of establishing the material truth and inform us about the outcome of this criminal report,” it is emphasized in the explanation.