All fascists in one place in defense of Vučić's regime

Their violence will go unpunished, as long as they fulfill the tasks of the government on the ground, and those are primarily attacks on the opposition and dissidents. 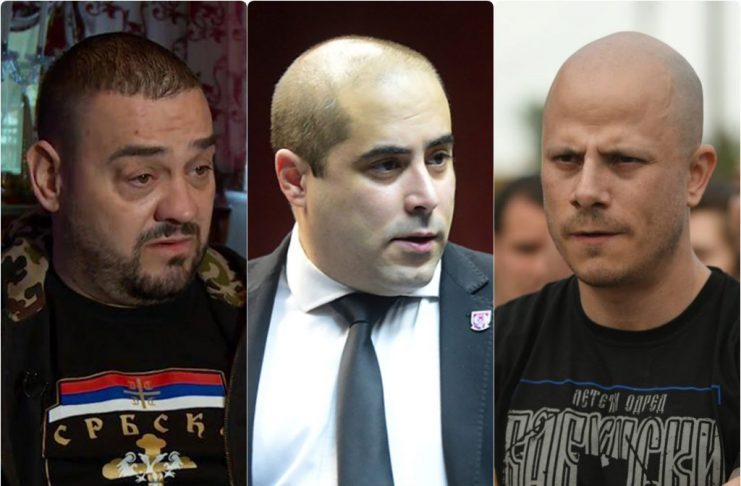 Instead of examining the activities of ultra-right organizations that have been raging in Serbia for years, spreading dangerous and destructive policies, the Serbian Progressive Party's government has given back support to movements whose activities rely heavily on glorifying the pernicious ideology. Their violence will go unpunished, as long as they fulfill the tasks of the government on the ground, and those are primarily attacks on the opposition and dissidents.

In the last two weeks alone, Leviathan members have attacked PSG leader Pavle Grbovic and tried to prevent a conference by SSP Vice President Marinika Tepic. They are doing all this without consequences and with the tacit support of the authorities.

Discrimination, violence, targeting people, are part of the standard opus of Leviathan, but also the Serbian right and the Serbian part, organizations that resort to hatred and the spread of intolerance.

In turn, these movements, whose struggle to protect national interests and care for pets serves solely to disguise their fascist nature, are doing the dirtiest jobs for the regime on the ground.

This could be seen on Wednesday during the conference of opposition politician Marinika Tepic. Namely, a vehicle with the sign of the Leviathan Foundation of Belgrade license plates and two other cars with Kragujevac registration plates tried to interfere with the address of the citizens of Kragujevac with strong sirens.

However, instead of preventing this opposition politician from speaking, they blocked traffic in the very center of the city, which angered the people of Kragujevac.

That one of the basic tasks of the Leviathan is to persecute opponents of the regime, could be seen less than 10 days ago when the founders of this movement, Pavle Bihali, and three other members attacked the leader of the Free Citizens Movement, Pavle Grbović. In a statement given to the Nova.rs portal, Grbović said that the incident took place in the center of Belgrade, in front of a large number of witnesses. He reported the case to the police.

“So far, they have had the undisguised support of the state, which is why I do not expect that the same state to protect me now, on the contrary, I expect such incidents to happen again,” said Grbović.

His predecessor at the head of PSG, Sergej Trifunović, had a similar experience with this movement. Namely, during the July protests last year, an unknown person hit Trifunović in the head with a camera, and he later explained to the media that he was a member of Leviathan.

Proof that there is a connection between Leviathan and the SNS is the case of Filip Radovanović, a man from Obrenovac who crashed his car into the Reception Center for Migrants in that place in May last year. Radovanović was employed in the municipality of Obrenovac as the president of the Commission of the Council for Cooperation with Youth and Associations, as a member of the SNS.

Mrdalj: They serve Vučić to be the voice of reason

Political scientist Mladen Mrdalj told the daily “Nova” that it is obvious that the representatives of these organizations are exponents of the government.

“If they do not criticize the government and only focus on the opposition, what is there to collect and take away? They are forcing the opposition into an impossible thing – to complain to the state bodies that Vučić controls in order to protect them from those that Vučić also controls. In that way, they delegitimize themselves”, emphasizes Mrdalj and adds that ultra-right organizations are needed by the President of Serbia in order to present himself as the voice of reason.

Citizens are afraid of violence. When ultra-rightists provoke violence, Vucic presents himself as someone who provides stability and peace. It is a perfidious strategy to which the opposition currently has no answer.

The organization of the Serbian part, which took “the law into its own hands” several times, invaded other people's property and confiscated things without authorization, is no less behind Leviathan.

The leader of this organization is Bojan Stojković, who became known to the general public after the video of the abduction of an abused horse from a Roma family, while another, Igor Bilbija, was arrested for racketeering and organized crime.

Miša Vacić was employed in the Government of Serbia

Along with Leviathan, the founder of the Serbian right, Miša Vacić, also gives undisguised support to the regime. At one time, he was employed in the Government of Serbia, ie in the Office for Kosovo and Metohija, and then founded a political organization whose activities are based on threats to national minorities, opposition, propaganda of fascist ideology and agitation for the regime. Vacic recently was among the first to sign a petition to “defend the reputation of Serbian President Aleksandar Vucic from the media war.”